BCNetcom provide production for Augmented Reality project to allow company to interact with their target users.

Augmented reality (AR) is a term for a live direct or indirect view of a physical real-world environment whose elements are augmented by virtual computer-generated imagery. It is related to a more general concept called mediated reality in which a view of reality is modified (possibly even diminished rather than augmented) by a computer. As a result, the technology functions by enhancing one’s current perception of reality.

In the case of Augmented Reality, the augmentation is conventionally in real-time and in semantic context with environmental elements, such as sports scores on TV during a match. With the help of advanced AR technology (e.g. adding computer vision and object recognition) the information about the surrounding real world of the user becomes interactive and digitally usable. Artificial information about the environment and the objects in it can be stored and retrieved as an information layer on top of the real world view. The term augmented reality is believed to have been coined in 1990 by Thomas Caudell, an employee of Boeing at the time.

Augmented reality research explores the application of computer-generated imagery in live-video streams as a way to expand the real-world. Advanced research includes use of head-mounted displays and virtual retinal displays for visualization purposes, and construction of controlled environments containing any number of sensors and actuators. 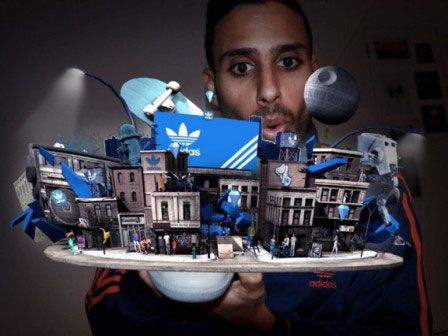 No matter you are promoting a product, spreading a marketing message or building up your brand, it is important that you are not only sending out a message, but to make the message stick in customer’s mind. Interactive marketing make use of Augmented Reality technology is a fantastic and effective way to reach this goal.

Ever think of bringing the supper star to your home? For most of the fans, they will have lots collection for the famous idol, such as poster, DVD, computer image and video etc. Now they can have more – the AR idol virtual figure. And they can have this “live” item in their environment. How good is that? Have you ever imagine Jessica C telling story to you in your bed? Ever think of the BAND Beyond singing in your living room? With AR, this can happen.